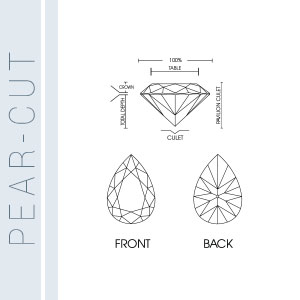 What is a Pear-Cut Diamond?

The pear-cut diamond shape is the unique combination of the round and marquise diamond shapes. As one of only two asymmetrical diamond shapes, the pear-cut features a tapered point on only one end and contains 58 facets. Pear-cut diamonds are as rare as they are stunning. Considered a modified brilliant-cut, the pear-cut sparkles as brightly as round and princess-cut diamonds but are considerably harder to find. Only about four percent of diamonds are cut into the pear shape, and only a small percentage of those are cut correctly. For these reasons, finding a well-cut pear-shaped diamond is truly an extraordinary find.

History of the Pear-Cut Diamond

The pear-cut is unique in that its invention revolutionized the diamond trade. Shortly after inventing the truly groundbreaking diamond polishing wheel, or scaif, Flemish diamond cutter Lodewyk van Berken cut the very first pear-shaped diamond in the 1450s. He pioneered the symmetrical arrangement of facets within a diamond, which, in turn, led him to create the first pear-cut.

With his scaif, Van Berken was able to polish every facet of a diamond. This innovative approach helped create enhanced light refraction within a diamond. As a result of van Berken’s ingenious wheel design and technique, diamonds became more commonly used in fine jewelry pieces.

At Peoples, we rely on trusted experts from different gemological laboratories to grade our precious stones.

To determine a diamond’s grade, these labs inspect each diamond under closely controlled lighting and viewing conditions. Trained grading professionals use highly calibrated measurement devices to capture important data for use in determining the pear-cut diamond’s quality. These experts will then grade our pear-cut diamonds on the following determinations:

Each diamond is measured using the carat weight system. Diamond experts use specially calibrated scales to ensure accurate measurements with weights measured to the hundred-thousandths of a carat. One metric carat equals 0.2 grams.

Our diamond experts determine a pear-cut diamond's length-to-width ratio by dividing the length of the diamond by its width. This ratio determines how proportionate the diamond is in relation to its intended shape.

Because many small inclusions or blemishes are only visible to an industry professional with highly calibrated equipment, choosing your perfect pear diamond for purchase is largely a subjective process.

Regardless of which diamond you ultimately choose, be sure to determine whether or not any inclusions are visible to the human eye when evaluating a pear-cut diamond for purchase.

Pro-tip: due to the nature of the cut, pear-cut diamonds tend to conceal small inclusions very well – especially on the pointed end.

What To Look For in a Pear-Cut Diamond

When looking for the perfect pear-cut diamond for an engagement ring, the overall appearance of the stone is generally more important than the specific proportions of the cut. When shopping for a pear-cut diamond, personal taste should be the top priority. At Peoples, we also recommend the following guidelines to help match your personal style to the quality you deserve:

Is a Pear-Cut Diamond Right for Me?

A well-cut pear-shaped diamond features a unique shape with exquisite brilliance. Those who march to the beat of their own drum tend to appreciate the pear shape as it has a different look from any other cut. Additionally, the pear-cut’s shape complements small, slender hands well as it helps to elongate the fingers and hands.

The pear shape is exceptionally versatile. Pear-cut diamonds look stunning as a solitaire ring or wrapped with a halo of smaller accent diamonds. Traditionally, the pear-cut diamond is worn with the pointed end towards the wearer’s wrist, however it’s becoming more and more common to see the pear-cut worn away from the wrist or even laterally for a truly modern look. A pear-cut diamond is the ideal choice for those who appreciate timeless elegance with a touch of contemporary uniqueness.

First created in the mid-15th-century, the pear-cut diamond has a long history that coincides with the revolutionizing of the diamond industry. True to its groundbreaking history, many modern hands adorned with a pear-cut have broken from the tradition of wearing the pear’s point toward the wrist.

As one of the rarest diamond shapes on the planet, pear-cut diamonds are favored by those who appreciate exclusive elegance. From modern nobility like Princess Charlene of Monaco, to classic Hollywood stars like Elizabeth Taylor, the pear-cut diamond shape shines and slims gorgeously while amplifying your unmatched creativity.